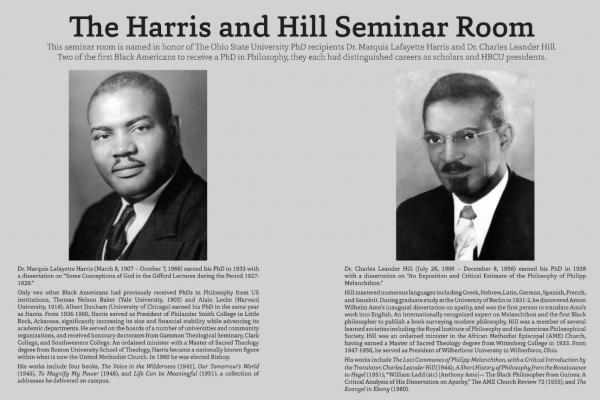 The Ohio State University Department of Philosophy has named its newly renovated seminar room in honor of two pioneering graduates of its PhD program, Dr. Marquis Lafayette Harris and Dr. Charles Leander Hill. Two of the first Black Americans to receive a PhD in Philosophy, they each had distinguished careers as scholars and HBCU presidents. The Harris and Hill Seminar Room (and the plaque to the right) can be found at 353 University Hall.

Dr. Marquis Lafayette Harris (March 8, 1907 – October 7, 1966) earned his PhD in 1933 with a dissertation on “Some conceptions of God in the Gifford lectures during the period 1927-1929.” Only two other Black Americans had previously received PhDs in Philosophy from US institutions, Thomas Nelson Baker (Yale University, 1903) and Alain Locke (Harvard University, 1918). Albert Dunham (University of Chicago) earned his PhD in the same year as Harris. From 1936-1960, Harris served as President of Philander Smith College in Little Rock, Arkansas, significantly increasing its size and financial stability while advancing its academic departments. He served on the boards of a number of universities and community organizations, and received honorary doctorates from Gammon Theological Seminary, Clark College, and Southwestern College. An ordained minister with a Master of Sacred Theology degree from Boston University School of Theology, Harris became a nationally known figure within what is now the United Methodist Church. In 1960 he was elected Bishop. His works include four books, The Voice in the Wilderness (1941), Our Tomorrow’s World (1945), To Magnify My Power (1948), and Life Can be Meaningful (1951), a collection of addresses he delivered on campus.

Dr. Charles Leander Hill (July 26, 1906 – December 8, 1956) earned his PhD in 1938 with a dissertation on “An Exposition and Critical Estimate of the Philosophy of Philipp Melanchthon.” Hill mastered numerous languages including Greek, Hebrew, Latin, German, Spanish, French, and Sanskrit. During graduate study at the University of Berlin in 1931-2, he discovered Anton Wilhelm Amo’s inaugural dissertation on apathy, and was the first person to translate Amo’s work into English. An internationally recognized expert on Melanchthon and the first Black philosopher to publish a book surveying modern philosophy, Hill was a member of several learned societies including the Royal Institute of Philosophy and the American Philosophical Society. Hill was an ordained minister in the African Methodist Episcopal (AME) Church, having earned a Master of Sacred Theology degree from Wittenberg College in 1933. From 1947-1956, he served as President of Wilberforce University in Wilberforce, Ohio. His works include:  Philipp Melanchthon, The Loci Communes of Philip Melanchthon, with a Critical Introduction by the Translator, Charles Leander Hill (1944); A Short History of Philosophy from the Renaissance to Hegel (1951); and “William Ladd (sic) [Anthony Amo]— The Black Philosopher from Guinea: A Critical Analysis of His Dissertation on Apathy,” The AME Church Review 72 (1955).

This project was pursued in conjunction with the Department’s chapter of the Minorities and Philosophy national organization.