The talks covered a range of issues concerning Spinoza’s life and work. The conference was co-sponsored by the Department of Philosophy and the Melton Center for Jewish Studies, and it coincided with a graduate seminar on Spinoza’s Ethics that Tamar was teaching. 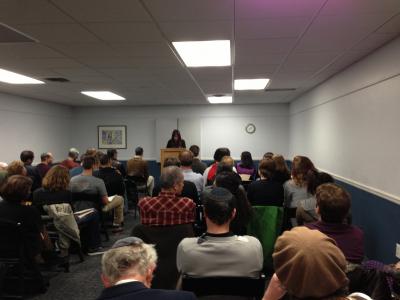 Nadler’s opening talk, held at the Columbus Jewish Community Center, focused on the question of why Spinoza was excommunicated from the Portuguese-Jewish community of Amsterdam. Through an investigation of the mysterious circumstances surrounding Spinoza’s excommunication, Nadler introduced prevailing themes in Spinoza’s philosophy to an audience composed of both philosophers and non-philosophers.

The next day’s talks, which took place in the  philosophy department, focused on a variety of issues in Spinoza’s philosophy: Adler discussed the influence of Italian author and scholar, Joseph Delmedigo, on Spinoza; LeBuffe dealt with the relationship between Spinoza’s psychological theory and his views on belief in miracles; and Nadler gave a second talk on the picture of the “virtuous” person in Spinoza’s Ethics.