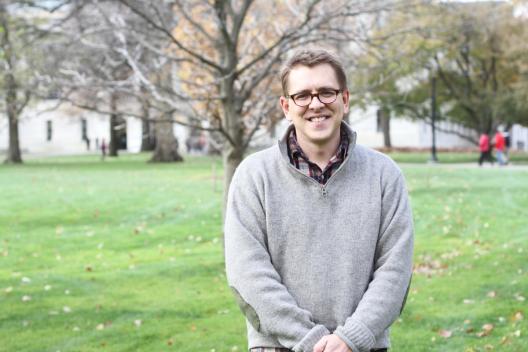 Steven Brown completed his PhD in philosophy in 2012, having written his dissertation, Virtue for the Rest of Us, under the supervision of Professor Justin D’Arms.

Today, Steven continues to teach for Ohio State’s Department of Philosophy. Rather than pursuing a traditional academic career path,  he has channeled his interests in ethics into a more applied endeavor: Steven is now the executive director of the Maximin Project, a non-profit organization that he developed to facilitate effective charitable giving.

Steven created the Maximin Project in 2011 in response to his experience teaching introductory ethics classes at Ohio State. He often raised the issue of global poverty in his classes and noted that—in contrast to contentious social issues such as abortion and the death penalty—there is little debate as to whether something should be done to alleviate extreme poverty. It simply seems obvious that poverty should be reduced; at the same time, however, there remain pressing practical questions as to what measures most effectively address the problem.

As Steven explains, “Extreme poverty has become a very difficult topic for me to present as a truly complex moral problem. Isn’t it just obvious that people shouldn’t be dying because they can’t get access to inexpensive life-saving medications? Isn’t it also obvious that if we can prevent those deaths by making small sacrifices and donating to charities that do effective, life-saving work on the ground, we should probably do that? What really is complex is moving from mere concern into informed action.”

The Maximin Project is designed to provide prospective donors with the necessary information and resources to contribute to those organizations that are doing the most good to alleviate poverty.

In working to bridge the gap between concern and informed action, Steven utilizes his experience in web development. Once launched, the Maximin Project’s website will provide color-coded world maps based on the UN’s Human Development Index and its component indicators of poverty (income, life expectancy, and education), supplemented by a database of projects that have been selected based on their proven effectiveness in disbursing aid to certain geographic areas. After users have identified areas in need of support and those aid organizations that are doing the most to benefit them, the interface will allow them easily to distribute their donations among recipients as they see fit. The result—as the name of the project suggests—is to enable donors to allocate their funds to help those with the greatest need.

As Steven describes it, the Maximin Project is the charitable equivalent to Amazon or iTunes, which his introductory ethics students are adept at navigating and funding. “If we are going to mobilize this generation of donors to invest in the eradication of extreme poverty,” he states, “we need to make finding and funding effective charities equally intuitive and compelling.”

While Steven’s teaching experience inspired his creation of the Maximin Project, and his computing experience enables him to implement his ideas, his approach to managing the project also has been influenced by the perspectives on ethics that he developed while writing his dissertation at Ohio State.

In his dissertation, Steven upholds a virtue ethical theory of right action—clarifying how virtue ethicists should understand what “right action” is. His supervisor, Justin D’Arms, recalls the creativity and novelty of his project, “Steve finished an excellent dissertation on how a virtue-based theory in ethics should approach the idea of right action. He argued, contrary to the most influential virtue-theoretic account, that what it is right for a person to do is not what he would do if he were fully virtuous. A person can have personal weaknesses that make a difference to what it is right for him to do. But if he were fully virtuous he would not have these weaknesses and ought to act differently. Steve used this thought to motivate an alternative account according to which it is right for a person to do what any of his ideal counterparts would recommend.”

Although the details of his theory of right action have not directly influenced the Maximin Project, Steven maintains that his thoughtful defense of virtue ethics continues to guide his approach to researching global poverty and evaluating the effectiveness of aid organizations.

Contrasting the Maximin Project with other advocacy groups, such as those of a more utilitarian bent, Steven emphasizes that research at the Maximin Project is “data-driven and expertise-driven but not calculation-driven.” As a virtue ethicist, Steven denies that the standards for right and wrong action can be codified into rules. Likewise, in running his organization, he rejects the assumption that there is a formulaic, one-size-fits-all metric by which to measure success in ameliorating ills such as extreme poverty. Thus, instead of merely applying computational methods to assess effective measures to combat global poverty, Steven gathers information from advisors who understand the situation from a ground level.

Although still in its developmental phase, the Maximin Project already has been immensely successful. The project recently reached—and exceeded—a $50,000 fundraising goal. It also has  received attention from the media, such as a 20-minute interview on NPR’s “All Sides with Ann Fisher,” as well as from philosophers at Ohio State and beyond—including such luminaries as Peter Singer.

Singer approached Steven in the course of his own research on effective altruism and remains supportive of the Maximin Project, which he has called, “an intriguing idea with the potential to transform the field of charitable giving, making it more user-friendly for donors and more effective in aiding those who need it.”

Also, Steven actively built connections with other researchers and entities whose interests are in global poverty. Last summer, for example, he spent four weeks at the Michigan Institute’s program on development ethics. This program brought him into contact with philosophers, such as Serene Khader, a specialist in global justice, normative ethics, political philosophy, and feminist philosophy; at Stony Brook University, who is now a member of the Maximin Project’s Board of Directors.

Back home, Emeritus Professor Don Hubin—one of Steven’s former advisors—also has joined the Maximin Project’s Board of Directors. Hubin states, “It’s exciting to see a project like Maximin take off. It’s a marvelous example of what is possible when compassionate motivation is informed by philosophical reflection, assisted by technical expertise, and ignited by a creative spark.”

Steven also has discussed the project extensively with Professor Piers Turner, who shares in the excitement, “Like a lot of people, I am very enthusiastic about the project. I first learned about it a couple of years ago when he and I and two undergraduates formed a reading group on development ethics. That field addresses a host of thorny issues concerning international distributive justice, collective and individual responsibility, and what our development aid aims should be in a world with limited natural resources. But I’m excited not just by the issues, but by Steve’s developed plan to become the Facebook of charitable giving by personalizing the experience. By making it easier to give, and in a more directed way that bypasses some intermediaries, it also helps to make certain ethical demands less easy to ignore.”

Steven also has begun to collaborate with Terri Bucci, the director of Ohio State’s Haiti Empowerment Project, which incorporates the resources of Ohio State and other U.S. universities in developing opportunities for post-secondary professional education in Haiti.

In addition to the Maximin Project, Steven remains heavily interested in teaching philosophy—not only ethics but also philosophy of religion. As a graduate student, Steven appeared in a previous edition of “Logos” for designing and teaching a debate-format philosophy of religion class—in collaboration with then-fellow graduate student Wesley Cray—which proved to be immensely popular and successful. Although these former colleagues now teach at different institutions, their joint work continues: Steven and Wesley currently are under contract with Routledge to write an introductory textbook on the debate between theism and atheism. Their goal is to produce a friendly, accessible introduction to the debate without sacrificing the depth and complexity of contemporary research on the issues.