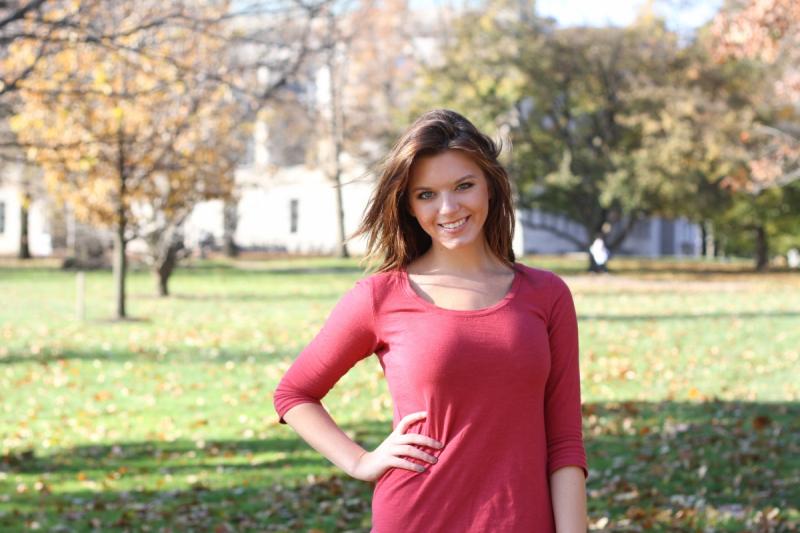 Cyara Hotopp began her undergraduate career as a political science major at Otterbein University, but it was her first philosophy class, she says, that recaptured her love of learning.

After transferring to Ohio State, Cyara found the Department of Philosophy to be a perfect setting in which to pursue her new-found fascination with the discipline. “My experience with each professor in Ohio State's philosophy department has been nothing but positive,” Cyara reflects. “They are inspiring, intelligent, wonderful and open people, as well as absolutely incredible teachers.”

Cyara remarks that Smithies “is great at facilitating discussion, and he has a way of bringing out the very best in each of his students.” Smithies offers reciprocal praise to Cyara, “Cyara was one of the best students in my epistemology class; she was particularly good in class discussion, where her contributions were always articulate, thoughtful, and germane.”

Cyara did not meet Caplan until her final semester at Ohio State, when she enrolled in his course on grounding and fundamentality, but quickly came to share his enthusiasm for the material—so much so that she developed what Caplan describes as "a strange case of anti-senioritis."

Caplan recounts, "After getting into Ohio State’s law school, she decided for the last paper of her undergraduate career—in which she argued that Karen Bennett’s view that A grounds the fact that A grounds B is less plausible when A is not itself fundamental—that, of all things, she wanted to 'make it count.'"

Cyara credits at least part of her anti-senioritis to Caplan's teaching style. She states that he is, “engaging and truly passionate about the subject matter he teaches, which in turn elicits excitement on the part of his students. He has a way of making even the most abstract of concepts accessible, and not only makes time for his students, but demonstrates genuine enthusiasm in addressing and discussing our questions.”

Cyara took three courses—philosophy of logic, advanced symbolic logic, and advanced probability and inductive logic—from Shapiro, who recounts her outstanding term project in the probability and inductive logic course and "stellar" final exam in symbolic logic. Cyara also has fond memories of Shapiro, “He was always exceptionally kind and supportive, and his encouragement gave me the confidence to speak up, and to pursue my goals.”

After completing her BA in philosophy in the spring of 2013, Cyara is in her first year of law school—a discipline in which she has already found her experience in philosophy to prove exceedingly useful.

Describing the many ways in which her philosophy degree has prepared her for law school, Cyara says, “Like philosophy classes, law school places a great emphasis on the Socratic method, and instructors rely greatly upon discussion. Through philosophy, I am not only accustomed to making and defending a point, but thoroughly enjoy doing so. My background in logic has been particularly useful in forming and analyzing arguments, applying rules to fact patterns, and critically reading and engaging with cases.”

Furthermore, she credits her philosophical education for aiding her reading comprehension, helping her to become a "more technical and efficient writer," and instilling in her "the importance of being proactive, however attractive it may be to procrastinate until the end of term,” all of which she has found to be invaluable skills in law school.

Although she has not entirely settled upon a specific career path, Cyara currently is interested in immigration law or working for the government as a prosecutor.

In the meantime, Cyara—who has been a figure skater for 15 years—is employed as a member of the Ice Crew for the Columbus Blue Jackets hockey team. Through her position with the Blue Jackets, she has been able to actively participate in community events such as charity functions, parades, and public appearances. One of her largest public appearances came early in this autumn semester, when she spoke to Ohio State’s entire freshman class about her experiences with the Blue Jackets.

Ben Caplan aptly summarizes Cyara's diverse talents when he states, "I'm pretty sure that Cyara is the first person from the Columbus Blue Jackets organization, and almost certainly the only former Sports Illustrated hockey cheerleader of the week, to have pointed out that, if Jonathan Schaffer is going to appeal to relativistic quantum field theory to undermine the view that entangled systems are fundamental particles standing in entanglement relations, then really he's got to be thinking that the cosmos— the fundamental whole that he identifies the largest entangled system with—is more field-like than thing-like."

When she is not studying or skating, Cyara enjoys shopping, babysitting, and watching documentaries about aliens.