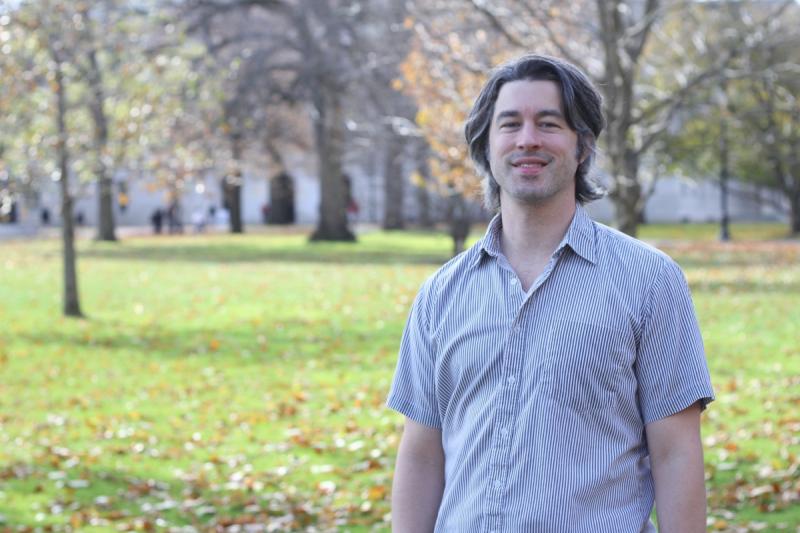 Prior to his philosophical career, Owen King earned a bachelor’s degree in computer science from the University of Georgia—where he would go on to complete bachelor’s and master’s degrees in philosophy, before coming to Ohio State to complete his PhD.

Owen presently is in his final year of graduate work in philosophy, writing a dissertation on the topic of personal goodness. At the same time, however, he has not abandoned his earlier interests in computer science. On the contrary, Owen recently has developed a new introductory course on Computing Ethics for the Department of Philosophy. In this new course, which Owen has taught to great success, students engage such issues as intellectual property, hacking and cybercrime, privacy, globalization, and unanticipated consequences of technology.

For many years, students in Ohio State’s College of Engineering have been required to complete an ethics course, which they typically fulfill through a general Engineering Ethics class. However, through his experience in teaching the latter class, Owen came to conclude that it was not optimally focused to address issues of specific concern to computer science majors.

Owen states, “An important bit of student feedback I received in Engineering Ethics was from the computer science students. They rightly complained that too much of the course was about explosions and structural failures, and there was little pertaining to ethical issues in computing. To accommodate these students, I began devoting a couple of weeks of each course to those issues. But this brought new difficulties: the students in traditional engineering were not disposed to engage with the new material, and the computer science students still faced many weeks of material they found irrelevant.”

Eventually, Owen concluded that the best solution was to develop an entirely new course with the computer science students in mind—and he took the initiative of proposing, designing, and teaching such a course as a special section of the department’s Engineering Ethics course in spring 2013. This pilot version of Computing Ethics was immensely popular with students, and Owen was impressed by the degree of student learning in the class. Now, in light of this successful effort, Computing Ethics is on schedule to be added to the department’s course listings as its own course, Philosophy 1337, in spring 2014.

Emeritus Professor Don Hubin (then chair) commends Owen for his novel contribution to the department's undergraduate education, “Owen’s commitment to innovative and effective teaching is well illustrated by his development of the computer ethics course. He recognized a curricular need, designed a terrific course to fill that need, and taught the course with remarkable success. This is a lasting contribution to philosophy instruction at Ohio State.”

Beyond designing a new course, Owen has incorporated novel and creative pedagogical strategies in teaching Computing Ethics. For instance, to encourage students to draw connections between course material and current events, he uses a course blog on which students link to news stories about computing and information technology and comment on ethical issues that arise in them. As Owen describes it, the blog “gives the students practice explaining issues that are both technically and ethically complicated. This skill will allow them to be intermediaries between the public and the tech world.”

So far, the activity has been successful in allowing students to achieve this learning objective; Owen remarks on the “nuanced and sophisticated” blog entries that he received during the pilot course.

Owen’s development of the Computing Ethics course is one of the latest of his many contributions to undergraduate education in the Department of Philosophy.

In March 2012, Owen conceived and organized Teaching Engineering Ethics: A Workshop—an internal graduate student conference, which generated dialogue between past, present, and future instructors of Engineering Ethics (a course which is routinely taught by philosophy graduate students). Owen also has long been instrumental in maintaining an online directory for the sharing of course materials among graduate instructors.

Moreover, before designing and implementing his computing ethics blog, Owen successfully incorporated online interaction in other introductory classes. A notable example is his Fallacy Wiki, which he introduced into his Introduction to Logic course in autumn 2012. The Fallacy Wiki allows students to compile examples of the logical fallacies discussed in class, consolidating them into a comprehensive online encyclopedia of fallacies that can be viewed, edited, and commented upon by all members of the class.

In spring 2013, Owen received the departmental Graduate Student Teaching Award in recognition of his many contributions to the department’s undergraduate teaching efforts.

Professor Lisa Shabel summarizes the thoughts of many about Owen’s innovation as a teacher, “Most of us, when dissatisfied with the way a course went, resolve to try a new textbook, or introduce a few new activities or assignments next time we teach the course. By contrast, Owen creates a whole new course, or an altogether new teaching tool.”

Owen’s dissertation, supervised by Professor Justin D’Arms, concerns the relationship between a person’s well-being at various times in her life and the goodness of her life as a whole. Owen defends the position that this connection is not as close as commonly assumed—after which he argues that the concept of desirability is more normatively important than often recognized, and finally develops a dispositional metaethical account of desirability.

D’Arms describes Owen and his dissertation as follows, “Owen has a passion for philosophy along with a lot of talent. He is always ready to talk about any philosophical topic, and his dissertation exhibits the range of his strengths and interests as a philosopher. He is working now on the relationship between wellbeing and the good life for a person. These notions are often treated as one thing by philosophers, or as related in some fairly simple way, so that to improve someone’s wellbeing at some point in time is to contribute positively to the overall goodness of his life. Owen has an exciting challenge to this idea, and more generally to the idea that wellbeing and the goodness of a life are connected in anything like the ways it is natural to suppose. His work raises the question of why wellbeing matters once it is severed from improving one’s life.”

Although his research focuses on metaethics and normative ethics, Owen’s interests in applied ethics—especially computing ethics—also extend beyond pedagogy to research. Recently, Owen has been examining the ethics of implementing antifeatures (i.e. functions of computer programs that are intended to restrict the capacities of the user). Owen states, “It is widely accepted that engineers, including (arguably) programmers, have a duty to promote the public good. Being tasked with implementing antifeatures subordinates this duty to the good of the software company. On the other hand, software and media companies argue that their business model depends on antifeatures.”

When he is not busy with research and teaching, Owen enjoys growing vegetables and herbs in his home garden and throwing darts.