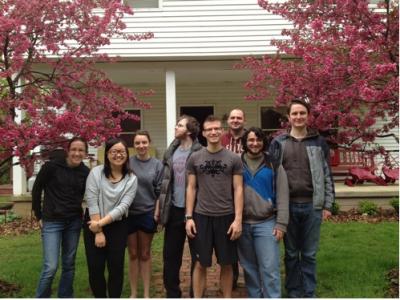 The theme of  this year’s retreat was the ontology of fictional characters. Peter van Inwagen’s “Creatures of Fiction” and Anthony Everett’s “Against Fictional Realism” set the stage for thinking philosophically about the characters in the films Stranger than Fiction and Pleasantville.

The two articles were sent to the students ahead of time  to prime them for the weekend, while the films were shown during the trip. Upon arrival Friday night, we rewarded the students for taking the drive down with a light night of dinner and a showing of Stranger than Fiction. Without any further prompting, the conversation instantly blossomed.

The following day, the students were invited to go on hikes, take a swim, or just sit by the fire and chat. Throughout the day students engaged each other as well as Ben and Christa in discussions regarding the possibility of including fictional characters in our ontology.

On the second night we projected Pleasantville, a film unknown to many of the students, but fully appreciated for its ability to blur the lines between fiction and reality. Discussion of this film was just as fruitful as the first, providing lively philosophical conversation Sunday morning as we prepared to depart.

Students left excited to continue discussion of the themes on their drive home and encourage their fellow philosophy friends to consider the trip in the future (unless they themselves were allowed to be a part of the trip twice of course).

As always, the retreat was made possible by Jim Jeffers, who donates use of his Tree Farm for this purpose every year, and by Mike Perkins, who provides financial support. Both Jim and Mike are alumni of Ohio State’s philosophy department and were students of Daniel Farrell. Their kindness and generosity are always greatly appreciated by all.