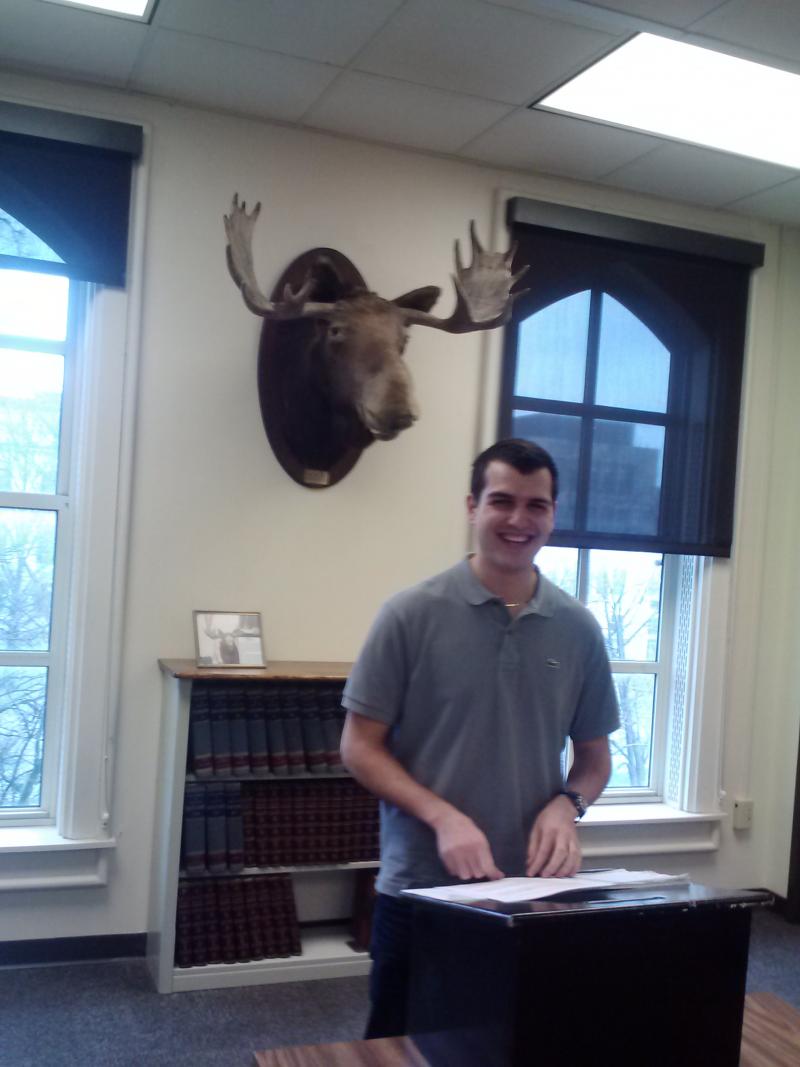 Brandon Sadowsky, originally from Long Island, decided to come to Ohio State for two main reasons: the quality of the political science department, and the appeal of attending a school with Big Ten sports teams. Before the end of his first year as a political science major, however, Brandon discovered his love of philosophy and has not looked back.

Today, more than three years and 17 philosophy courses later, Brandon is in his senior year as a philosophy major and preparing for law school—seeking schools with a strong philosophy of law faculty so that he can continue his philosophical education while pursuing his long-term goal of becoming a law professor.

When he arrived at Ohio State, Brandon had never considered an education in philosophy. However, he decided to enroll in a philosophy class at the end of his freshman year at the suggestion of his friend Abram Feldman, himself a former featured Logos undergraduate, whom Brandon met through the Alpha Epsilon Pi fraternity (AEPi).

The class that he selected, Professor Lisa Shabel’s introduction to symbolic logic, proved such a rewarding experience that Brandon decided to major in philosophy. Reflecting on the class, he states, “I absolutely loved it. I eventually went on to take two history of philosophy courses with Professor Shabel. She’s an extraordinarily talented professor and has definitely influenced me.”

Shabel, likewise, was extremely impressed by Brandon, whom she describes as "among the best students I have ever taught across a range of qualities: he is intelligent, critically acute, extremely disciplined, focused and curious. I have never taught a student in more than fifteen years of teaching at Ohio State who is as consistently and thoroughly prepared for each class meeting."

In the end, Brandon completed far more classes than he needed for the major—enough that he could have instead graduated with a second major—but he wanted to continue doing more and more philosophy. Unsurprisingly, his philosophical interests are broad—encompassing moral philosophy, legal philosophy, philosophy of logic, early modern philosophy and more. Brandon believes that his interests are so expansive because he enjoys the process of critically analyzing arguments regardless of the particular content. “I like digging into a text, picking out the argument and responding to it critically,” he states. “Philosophy has helped me improve my critical thinking, writing and communication abilities.”

Brandon has most enjoyed classes that encourage discussion among students, which he attributes to the clear presentation of the material by his professors: “When the material is presented really clearly, people are more confident that they understand it and are ready to talk about it,” he remarked when asked about qualities of a great philosophy class. At Ohio State, he noted, “There are certain classes where students will stick around outside University Hall for two hours after class talking about Kant, Nozick and countless other interesting topics.” This type of active and enthusiastic discussion, fueled by the material taught in classes by invested professors, is what Brandon says has defined his experience in the philosophy department.

Instructors also have appreciated Brandon’s contributions to class discussion. Professor Piers Turner, who introduced Brandon to philosophy of law, remarks: “Brandon was a standout student and a talented young philosopher. He asked carefully constructed questions that invariably went to the heart of our class discussion and the readings.”

Brandon also has become an exceptional philosophical writer. In his junior year, he won the Bingham award—an annual award given to an outstanding undergraduate philosophy paper—for his paper “Irrational Blame: A Problem for Scanlon,” which he wrote for an Honors value theory class taught by Professor D’Arms. In this paper, Brandon opposes the account of blame developed in T.M. Scanlon’s Moral Dimensions on the grounds that Scanlon fails to account for irrational or inappropriate blame: “Sometimes we overly blame people (or so I argue), and Scanlon’s account cannot seem to capture these instances of blame.” Brandon goes on to provide a modified account of blame designed to resolve the problems for Scanlon's account.

Reflecting on Brandon's paper, D’Arms states, “That may have been the best undergraduate paper I have received in nearly twenty years at Ohio State. It was a real pleasure watching Brandon craft multiple drafts in response to feedback from me and the other students, taking what started as a good idea and turning it into a careful work of philosophical argumentation.”

After a legal writing class, in which the professor encouraged students to submit work for publication, Brandon published his course paper, “Institutionalized Silence: The Problem of Child Voicelessness in Custody Proceedings,” in Washington Undergraduate Law Review. This inspired him to revisit his award-winning philosophy paper—which has now been published in the undergraduate philosophy journal The Yale Philosophy Review.

In addition to building a publication record for himself, Brandon has taken the initiative in designing and developing an undergraduate law review at Ohio State. Although the law review is still in its formative stages, Brandon is working with the review’s faculty advisor, Professor Bob Eckhart (English), to build a membership base and produce their inaugural journal.

He describes his goals and motivations as follows: “I think it would be great to open up a resource where undergraduate students can get experience publishing or editing papers. I also envision the journal as a platform for considering legal issues from undergraduate students’ perspectives—people who come from diverse backgrounds and disciplines.”

When he is not reading and writing about philosophy and law, Brandon remains closely involved with AEPi. He has served as the philanthropy chair, a position in which he was responsible for running “The World’s Longest Barbeque” – an annual weeklong barbeque (Yes, 24 hours a day!) that benefits the James Cancer Hospital.